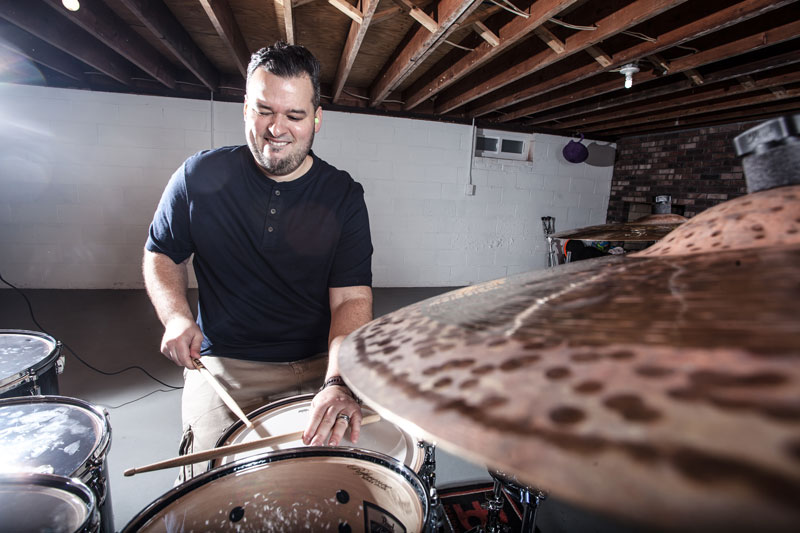 Juan “Carlito” Mendoza
Independent/Educator/2012 Guitar Center Drum Off Champion
"PolyNome is simply brilliant! You can work on subdivisions, timing, various sticking exercises, stroke combinations, various accented patterns, etc. It pretty much does ANYTHING you can think of. It's an integral part of my teaching at my private studio and when I travel to give workshops, clinics, drum camps and masterclasses."
- Juan “Carlito” Mendoza

Born and raised in Perth Amboy, NJ, Juan “Carlito” Mendoza has been studying and performing for the past 25 years. The classically trained musician (marimba, timpani, orchestral snare drum, vibraphone, drum set and hand percussion) received his BA in Music Education in 2004 (New Jersey City University) and his MA in Music Education in 2013 (summa cum laude). In a quest to further his musical knowledge, Juan Carlos has also had the privilege to study under Nicolas Cerrato (Timpanist for the Tony Award Winning Broadway show Cats), Greg Giannascoli (marimba virtuoso and percussionist of the Philadelphia Pops Orchestra) and Brazilian Master Guillerme Franco.

From a very tender age, Juan has been competing and establishing himself as a talented musician. At the age of 13, he competed and won Best Soloist in a national competition held in Niagara Falls, Canada. The competition was for instrumentalists competing on instruments, such as sax and trumpet, and included the participation of high school students.

Juan has also competed as part of various drum corps. In 1997 and again from 1999-2001, he participated with the world-renowned Hawthorne Caballeros Drum and Bugle Corps from Hawthorne, NJ. In 2002, he marched with the Syracuse Brigadiers, where they won the Drum Corps Association World Championship and won Best Percussion. Also in 2002, he competed and became the Drum Corps Association Snare Drum Champion, where he triumphed over other snare drummers from across the nation. More recently, Juan has been featured in Pat Petrillo’s DVD Learning to Read Rhythms by Alfred Music, where he played all the musical examples as well as a featured drum solo. Finally, Juan Carlos competed at the 2012 Guitar Center Drum Off, where he beat over 5,000 drummers around the nation to become the 2012 Guitar Center Drum-Off Grand Champion. Juan currently runs a drum educational website, where he offers an array of pre-recorded video drum lessons on various topics ranging from technique, masterclasses, electronic programming and a multitude of different musical styles. He has recently released his new drum method book Rudiment Creativity Vol. 1: Rolls and Paradiddle Rudiments which demonstrates how to apply rudiments in creative ways around the drum set. In addition, he is currently working on various drum method books, social media content and studio projects. Juan “Carlito” Mendoza’s endorsements include: Pearl Drums, Meinl Cymbals, Remo Drumheads, Vic Firth Drumsticks and Mallets, Meinl Percussion and Drumdots.

I use PolyNome to increase my understanding of rhythms, meters and work on my individual timing. I love that I can literally program anything into it. In addition, I can add or omit accents, adjust the mixer to really hone into the nuances of what I am working on and LOVE that I can download playlist from the Polynome community! PolyNome is for the serious teacher and student.

(click this on your iOS device to install the PolyNome Playlist)

Liked it? Take a second to support further development of PolyNome on Patreon!